Best Bluetooth Auxiliary Adapters: Over the past couple of decades, Bluetooth has totally redefined how we think of connectivity. Instead of a rat’s nest of tangled wires, we now have over-the-air connections for our phones, our earbuds, and an array of smart home devices. All of this is well and good until you find yourself with a device that isn’t Bluetooth enabled.

So what do you do if you want to play MP3 files in your non-Bluetooth-enabled car? Or for that matter, how would you connect a Bluetooth audio player to a standard stereo system? One of the easiest methods is simply to use Bluetooth Auxiliary Adapters 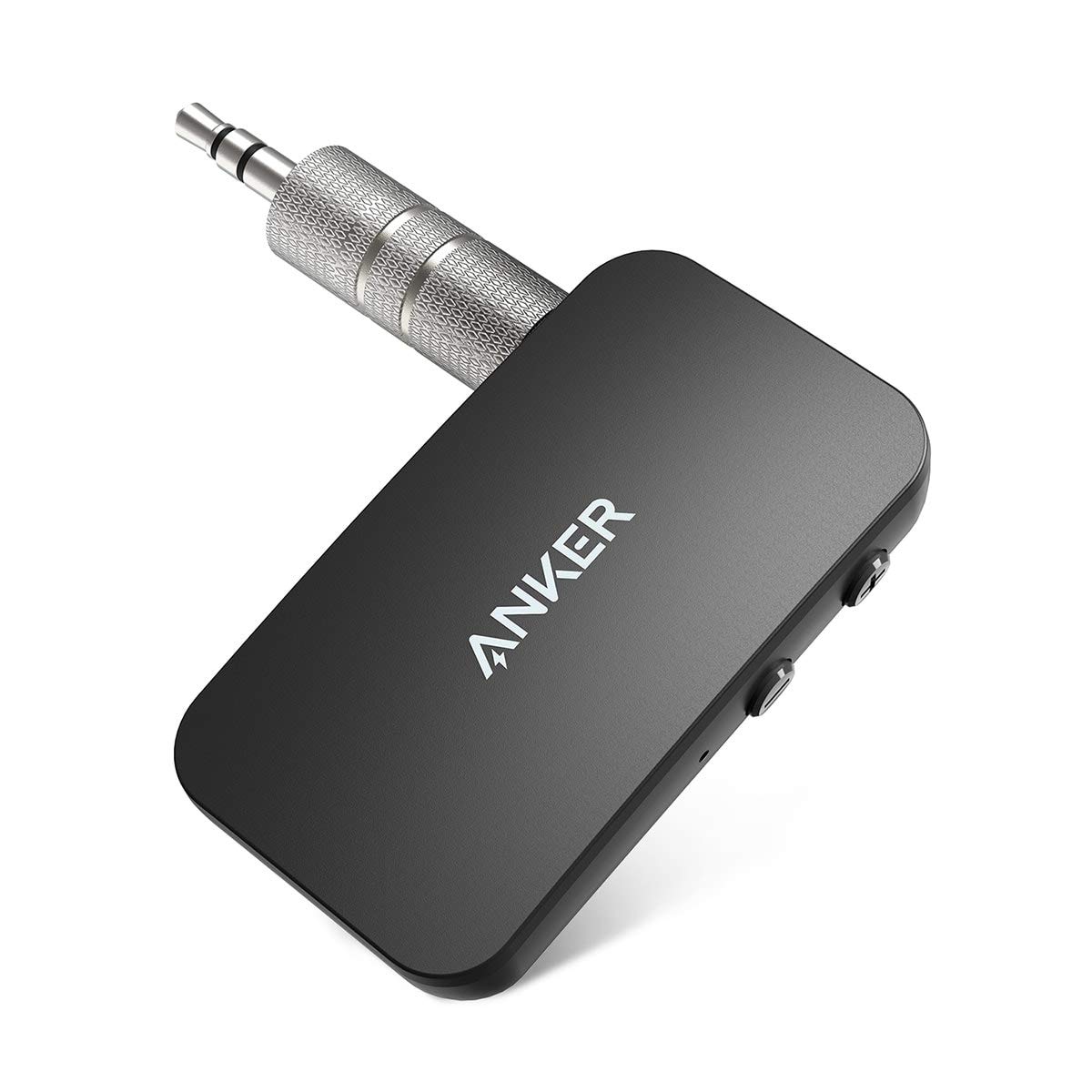 The Anker SoundSync A3352 Bluetooth Receiver is a compact receiver that measures 2 inches long by 1.1 inches wide and less than half an inch thick. The case is constructed from tough black anodized aluminum, with a matte finish that isn’t distracting.

In addition to the short, removable aux plug, it also ships with a 3-foot aux cable, so you can plug it into hard-to-reach aux ports without having to run a wire every time you plug it in. Sure, you could pick up a short cable for a few bucks, but it’s nice that Anker included one in the package.

The controls are fairly vanilla. On the front side of the case, you’ll find a pair of buttons to control the volume. On the side, there’s a single multi-function button that can be used for answering and ending calls, pairing your device, and other features that are dependent on the context.

It can take some getting used to, but once you’ve fiddled around with the SoundSync a few times, you’ll get the hang of it. This is par for the course with most Bluetooth devices, and it’s to be expected.

The SoundSync uses Bluetooth 5.0, the latest version of the protocol. It has a range of 30 feet, enough for use around the house as well as in the car. Syncing is easy. While a lot of Bluetooth devices can take some fiddling to get set up for the first time, that’s not an issue with the sound sync.

The TaoTronics TT-BR010 Bluetooth AUX Adapter is a little bit larger than the first two we looked at. It’s a square that measures 2.4 inches on each side, with a thickness of 0.6 inches. Because of this, it’s too large to use a short 3.5mm adapter in most situations, and it doesn’t even ship with one.

It does, however, ship with a short aux cable, which you can use in place of a short adapter. This means you’ll have to find somewhere to put it, though, since it won’t just hang off of your car’s center console.

The large size of the TaoTronics is due to its significantly larger battery. With a capacity of 850mAh, it will play for up to 55 hours on a single charge, easily blowing the competition out of the water. It charges in about 90 minutes via Micro USB, and can also be used while it’s charging.

There are two ports on the side of the TaoTronics: the Micro USB charging port, and the 3.5mm aux port. The top of the black ABS plastic case features a small LED light that indicates when it’s active, and the large control button is located directly in the center, with a TaoTronics logo emblazoned on it.

This button can be used for playing and pausing music, as well as for turning the unit on and off.

Be aware that there’s no built-in microphone on this unit, so it doesn’t play well with voice controls, and you’ll need to have your phone unobstructed to carry on a conversation. This can lead to a lot of echoes, so consider the TaoTronics for music, but not for phone calls. 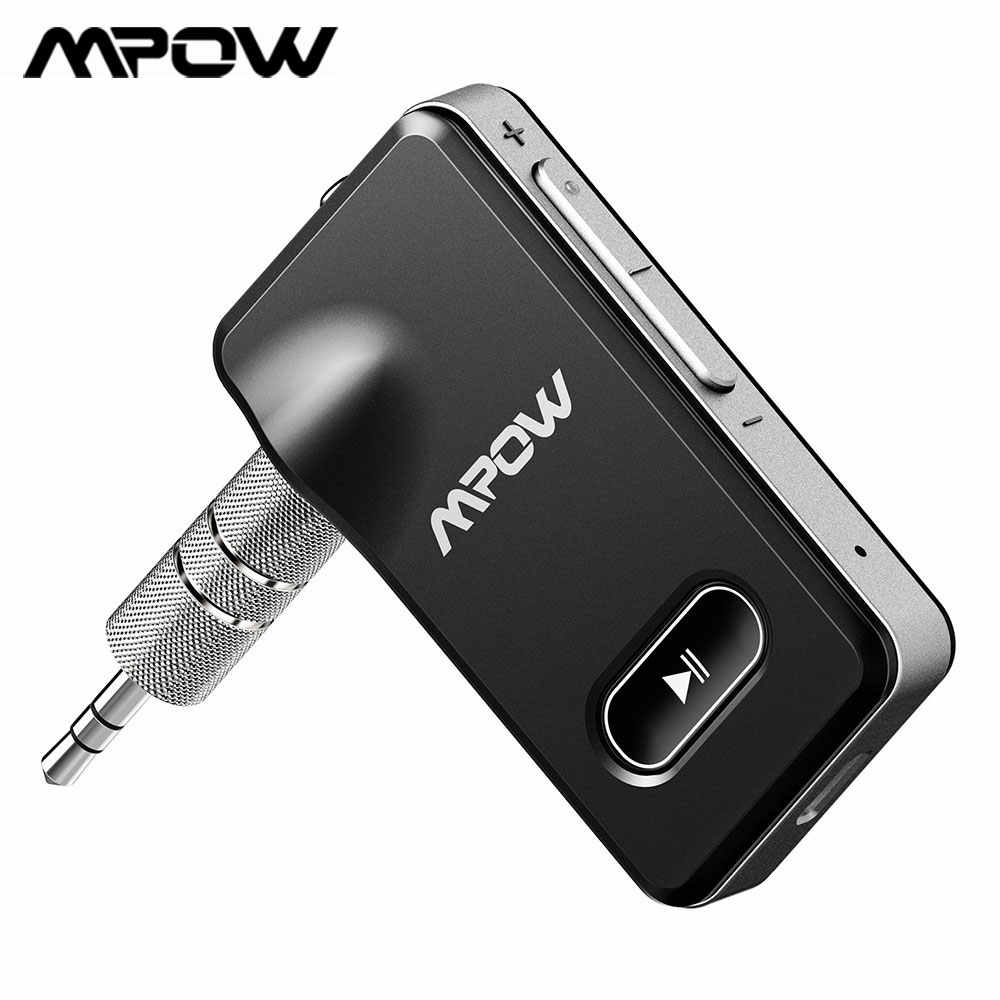 The Mpow BH129 Bluetooth Receiver is designed to connect your phone, MP3 player, or other audio sources to any set of speakers. Not only can you use the BH129 in the car, but you can also use it to connect to a stereo or even a pair of headphones. It’s constructed from black ABS plastic, with an aluminum frame and sides that are very sturdy.

There are two variants available: an all-black version, and a version with gray sides. There’s an on/off switch on the top of the device, and a play/pause button on the front that will work with most Bluetooth audio sources.

The 3.5mm aux plug is removable, so you can either plug the BH129 directly into your car or stereo, or you can remove the plug and instead plug a pair of headphones directly into the receiver.

The BH129 is designed for hands-free calling as well as for music. The play/pause button doubles as an answer button, although you can also use voice controls if your phone supports them. There’s a built-in mic, so you won’t need to worry about where your phone is while you’re talking.

Be aware, though, that if you’re using this adapter with a pair of wired headphones that have their own controls, you’ll want to use the answer button on the headphones, not the one on the adapter.

For your vehicle, the Mpow BH129 is our top choice. It’s compact and lightweight, and it offers plenty of battery life. But what really shines is the built-in microphone, which makes hands-free calling as effortless as possible, and which also reduces echo so the person on the other end of the phone will be able to hear you clearly. We also appreciated the fact that you can charge it in 45 minutes. It doesn’t get much faster and easier than that.

The Anker SoundSync A3352 is a close runner-up. It’s very similar to the Mpow but a bit more expensive. Capable of providing a simple, stable connection for a wide range of scenarios, it’s packed with most of the same look and features.

For home use, the TaoTronics TT-BR010 is tough to beat. We wouldn’t use it in the car, because it’s not designed for phone calls, but it’s exceptionally well-suited for connecting to a home stereo system. Using Bluetooth 4.2 was actually a good choice for this adapter, because of its longer range. If you’re looking to breathe new life into an old stereo system, the TaoTronics is your best option for Bluetooth Auxiliary Adapters