Best External Blu-Ray Drives: Not every laptop or computer comes loaded with all the features you may need. Sometimes you might want more storage, additional USB ports, or even a more powerful disk drive.

Rather than purchasing an entirely new computer just to compensate for the missing features or capabilities, you can purchase external accessories that you can simply hook up whenever and wherever you need them. Hard drives, printers, and even disk drives are all realistic options when it comes to external hardware, and are usually readily available.

The Pioneer Slim BDR-XD05 External Blu-Ray Writer had an incredibly compact design. It measures in at 5.24 x 5.24 x 0.58 inches and weighs only .51 pounds. It comes in a plain black color that didn’t give it the most stylish appearance but packed plenty of functionality and portability.

However, the most impressive part was the clamshell design. Unlike traditional disk drives, there’s no sliding disk tray. Instead, the entire drive opens and allows you to place the disk inside before closing the lid. We thought that this unique layout made the entire drive more convenient, easy to travel with and a snap to use.

The Pioneer Slim BDR-XD05 only has a write speed of 6x on single-layer and dual-layer BD-R & BD-R disks and 4x write speed on triple-layer and quad-layer disks. This makes it a little slower than some other external Blu-Ray drives on the market, but this felt like a worthy trade-off for its size.

However, like the other models on our list, the Pioneer Slim BDR-XD05’s speed will be affected by the specific disk used. It’s capable of speeds up to 8x and even 24x, but this applies to DVD and CD-R disks, respectively.

When it comes to Blu-Ray disks, it moves much slower despite having a high-speed USB 3.0 connection. However, its absolute slowest speed is 4x, while some others on our list could run as slow as 2x depending on the disk used. 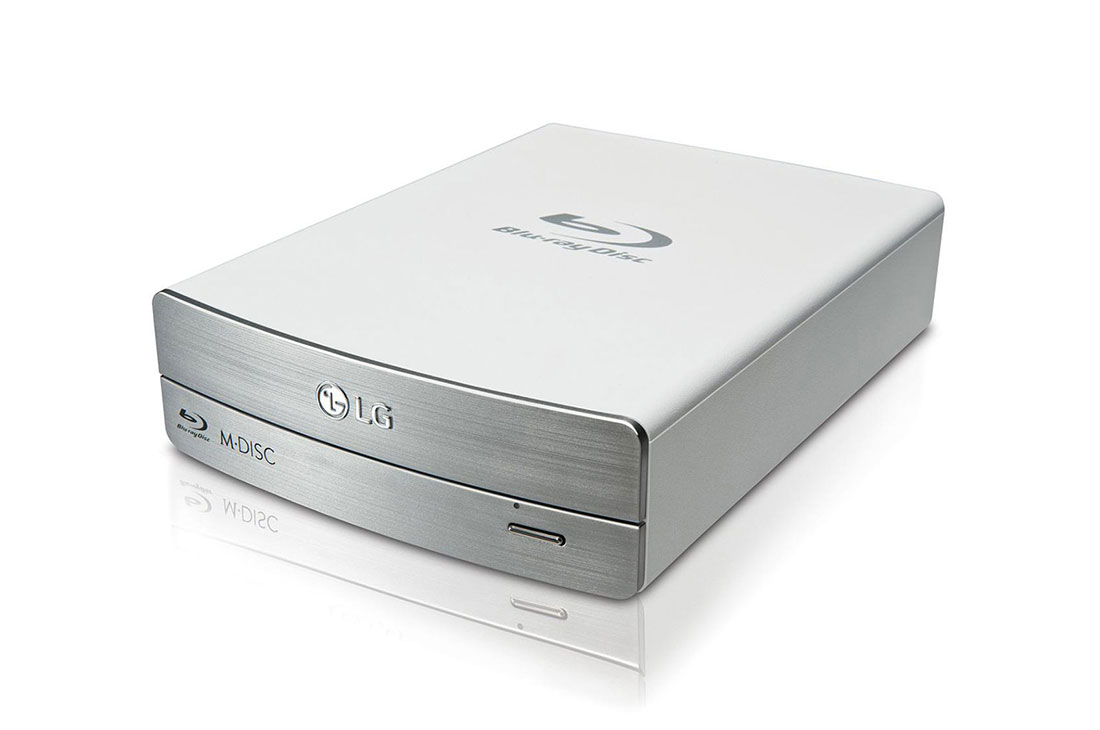 The LG BE16NU50 External Blu-ray Writer has a sleek design but isn’t the kind of optical drive you’ll want to be carrying around. It measures 8.7 x 6.3 x 2 inches and weighs about 2.3 pounds, so you may have more of a hard time putting in your laptop bag or briefcase.

This doesn’t mean you can’t take it with you if really have to, but it’s worth noting that it won’t be the most convenient accessory to pack up and reconnect if you change locations.

We would highly recommend using a USB 3.0 connection for best performance, mainly because it will allow you to transfer data at speeds up to 5 Gbps. This is a whopping ten times faster than using a standard USB 2.0 connection.

The actual read and write speeds will also vary depending on the type of disk you choose for your media. For example, BD-R (SL) disks have a write speed of up to 16x with the drive’s USB 3.0 while a DVD-RW disk can vary from speeds of 2x to 6x.

To give you an idea of the range of write speeds, 2x is at the lower end, while 16x is among the fastest available. The LG BE16NU50 has a large spectrum of speeds, but like most similar drives, its performance depends on the media format you choose, your USB connection as well as the amount of data you wish to transfer. Still, it’s capable of writing at the highest current speed available, given the right parameters. 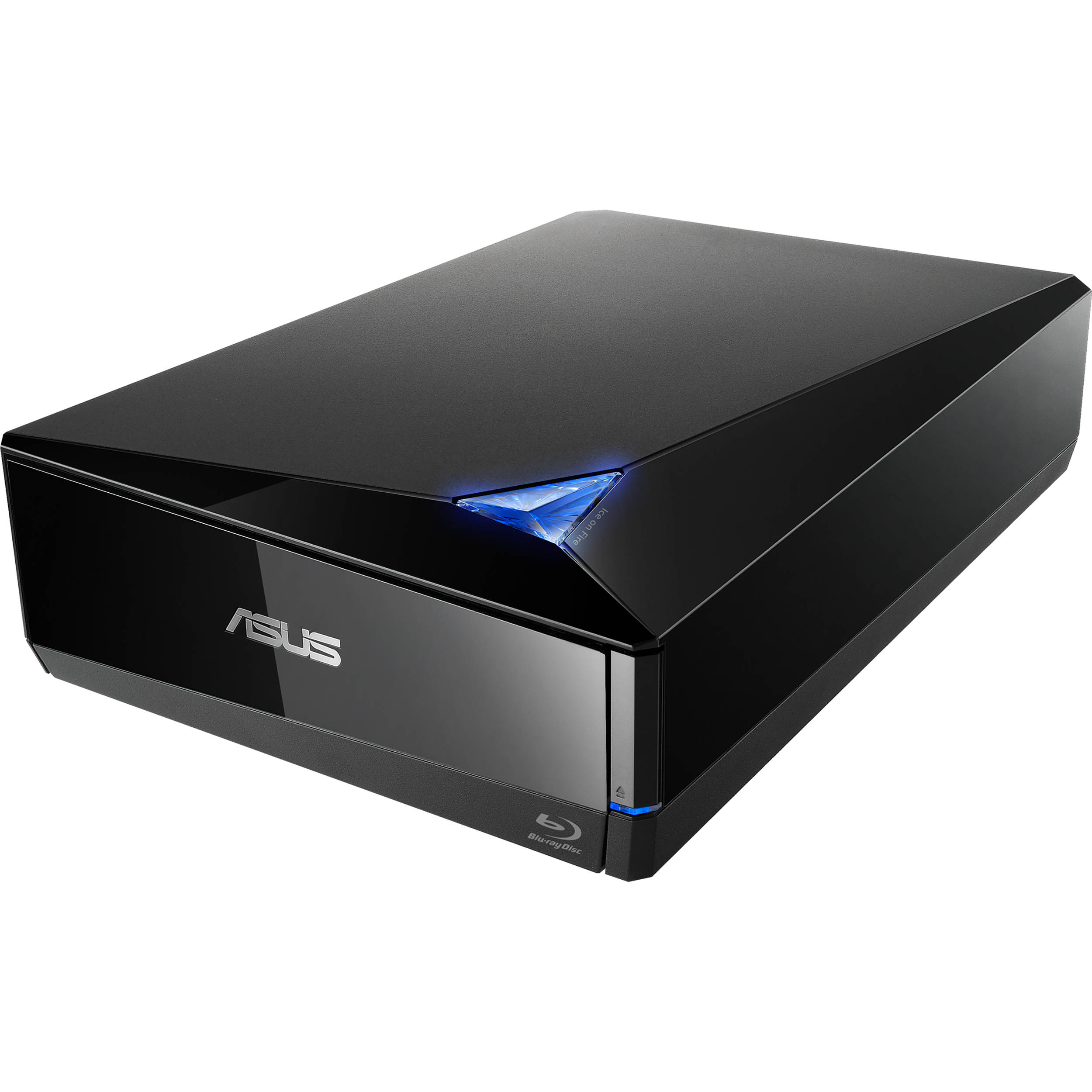 Of the three on our list, the ASUS BW-16D1X-U 16X Blu-ray Drive had the most eye-catching, robust design. It had a shiny, rectangular exterior, a single eject button on the front, and a really stylish indicator light that had the look of an ice crystal. There’s also a separate, smaller power light next to the eject button.

For a little added flair, ASUS even printed the words “Ice on Fire”, under the indicator light along with the ASUS logo on the front in silver. It’s on the larger side and is definitely not like the Pioneer Slim, but still had its advantages. It measures in at 9.5 x 2.5 x 6.5 inches and weighs a total of 2.6 pounds.

Unlike the Pioneer Slim BDR-XD05, it has a traditional disk tray that opens when the eject button is pushed, but it did seem to have the most secure mechanism for keeping the tray door closed while a disk was inside. Additionally, it can be positioned flat, or on its side, even though we felt like it worked best set up horizontally.

The ASUS BW-16D1X-U uses a USB 3.0 connection, has a read speed of 12x for BD-R disks, and an even faster read speed of 16x for standard DVD-R disks. Its lowest read speed is 4X for BD-RE disks; however, it still offered the most versatility when it came to the kinds of disks it could handle.

It also has a write speed of 16x for BD-R disks, with a bottom limit of 2X for BD-RE disks. It may have had a slow lower limit when it came to writing data, but this came as a result of the fact that it was able to process formats that the others couldn’t, specifically BD-RE (DL) and BD-RE(TL) Blu-Ray disks. Of the three, it had the highest range of speeds, combined with the largest range of compatibility.

It was a tough decision but we were the most impressed by the portability of the Pioneer Slim BDR-XD05. It may not have been the fastest on our list, but it had the best blend of performance, convenience, and portability. Being able to use it without a power cord and just a simple USB connection made it stand out.

The ASUS BW-16D1X-U was indeed the most powerful and the most robust of the three. However, it was much larger and difficult to carry around. Simply put, this made us feel like it wouldn’t be the best choice for those who need to travel with it. Keep in mind though, if burning speed is most important to you, we would recommend going with the ASUS BW-16D1X-U over the Pioneer.

The LG BE16NU50 was still a fantastic option. Much like the ASUS model, it was a little on the bulky side and required a power cord to use. However, the 16x BD-R burn speed and similar features to the ASUS model made it a great runner-up choice.