Best Trackball Mouse for 2020: Depending on where you work and how you use your computer, you may not have seen a trackball mouse for several years. That’s a shame because they have a lot to offer.

But many people overlook this type of mouse, instead opting for a more standard optical design. Today, we’re going to be looking at some of the top trackball mice on the market.

The difference between a trackball mouse and a traditional mouse is straightforward. A trackball mouse is operated by a large ball on the top, which you roll with your thumb or forefinger to move the mouse pointer.

They oftentimes have several additional buttons, which can be programmed for common computer functions. Let’s take a closer look! 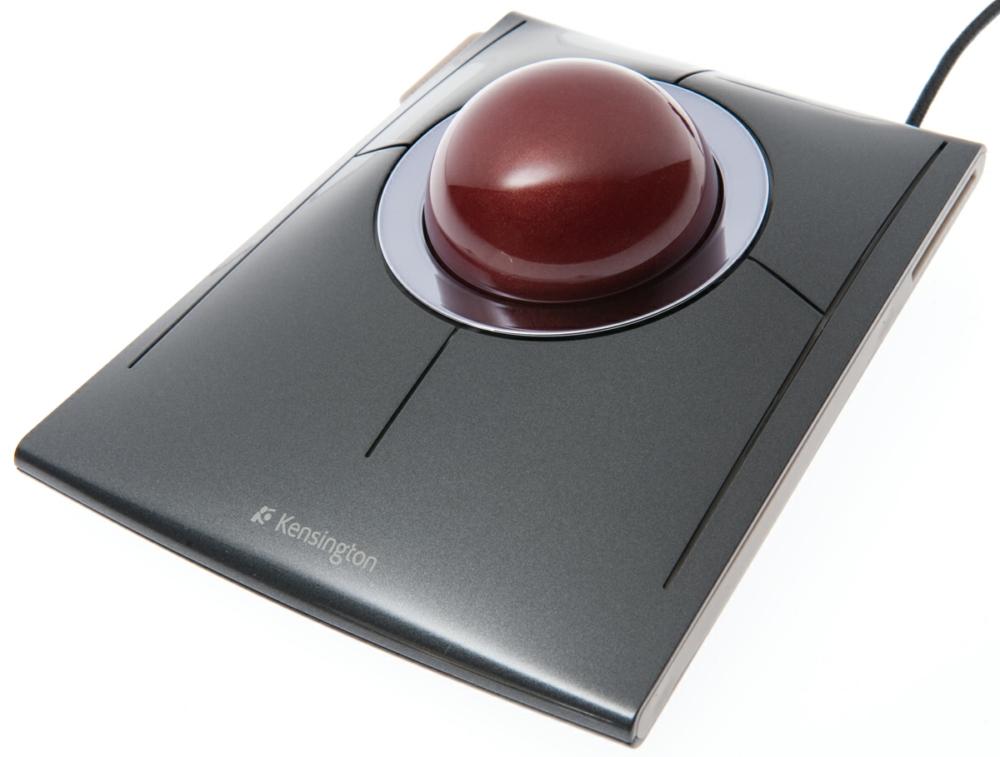 The Kensington SlimBlade is a compact trackball mouse with a rectangular frame that measures 6 inches long and 5 inches wide. It sits at a slight angle for ergonomics and is 3.5 inches tall including the trackball.

Without the ball, the top of the body sits a shad over 2 inches off the surface of your desk. The frame is constructed from attractive, black ABS plastic, and has a smooth profile. Four rubber feet on the bottom keep it in place and prevent it from sliding around while you’re using it.

The SlimBlade connects via USB 2.0, rather than via Bluetooth. On the plus side, this means you won’t need to worry about changing any batteries. On the downside, it also means you’ll need to plug it in, which can be inconvenient if you’re on the road with a laptop and your number of available USB ports is limited.

The trackball itself is removable, so you can take it easily out of the base and clean out the inner mechanical parts if your mouse starts to collect dust on the inside. But be careful carrying the SlimBlade, because it’s also fairly easy to lose the ball altogether.

The Kensington Expert is an upgraded version of the SlimBlade. It features the same trackball, along with a similar set of four buttons. However, all four buttons on the Expert are programmable, so you can map the left and right mouse button functions to the top, the bottom, or a mix of the above.

In addition, you’ll also find a textured ring around the trackball, which functions like the scroll wheel on a traditional mouse. Kensington has also added a detachable wrist rest that’s constructed from soft artificial leather that matches the black mouse body.

But the main difference between the Expert and the SlimBlade is the fact that the Expert is truly wireless. There are actually two different ways to connect to your computer.

First, you can use Bluetooth. Alternatively, you can pull the mini USB dongle out of the battery compartment, and connect via 2.4GHz radio just as you would with a traditional wireless mouse. The advantage of the Bluetooth connection is that it doesn’t require you to use up any USB ports.

However, Kensington’s downloadable configuration software only works via USB if you’re on a Mac. PC users can use either connection without any issues. 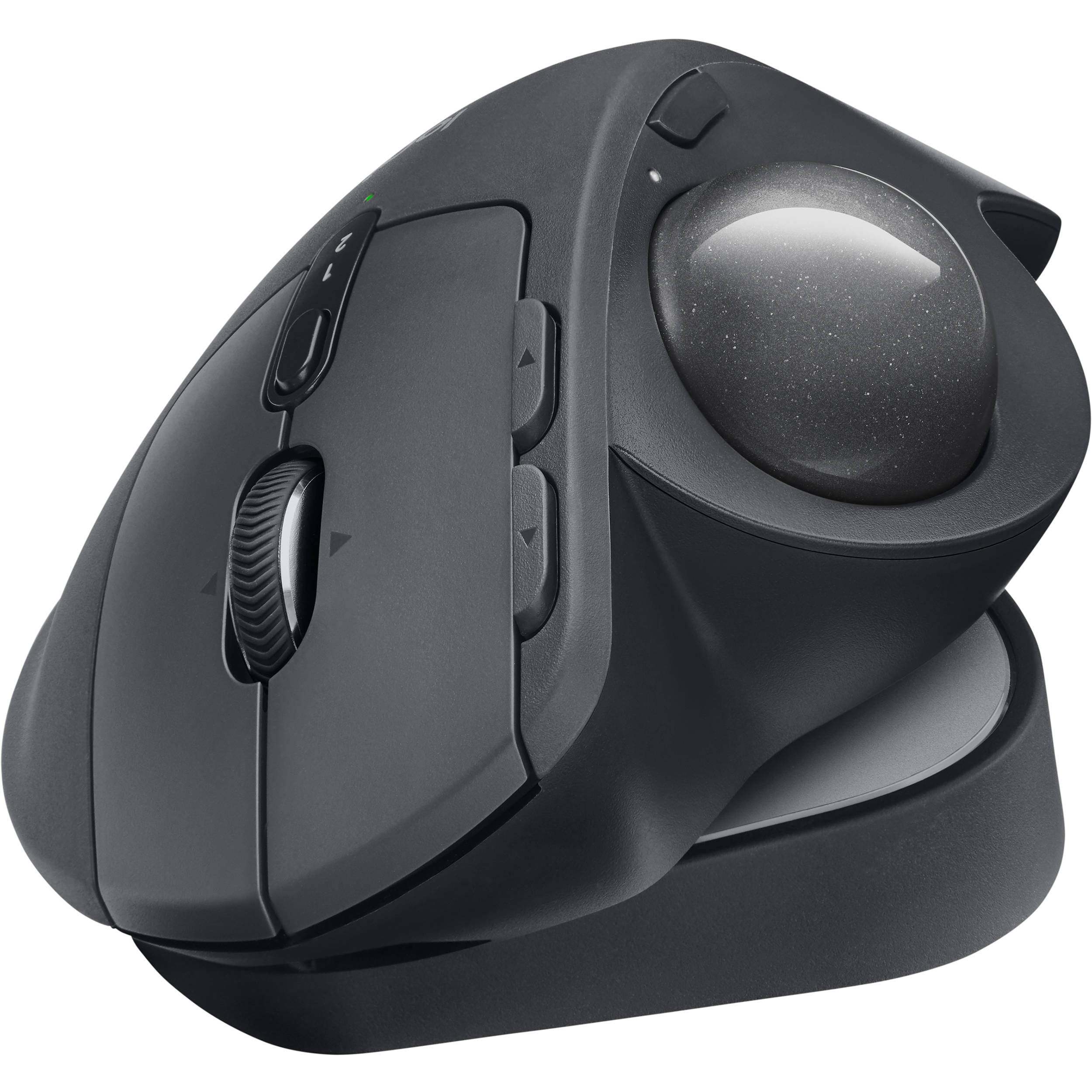 The Logitech MX Ergo has a more compact design than the last options we’ve looked at. It measures 5.2 inches long, 3.9 inches wide, and sits low to your desk with a height of only 2 inches.

This is possible because the trackball is located on the side, by your thumb, and you operate the other mouse buttons as you would with a traditional mouse.

The offset design leaves plenty of space for all four of your other fingers, which is fortunate since you’ll have several other buttons to play with.

The two primary mouse buttons are large and easy to operate. There’s also a scroll wheel, just as you’d see on many popular office mice. To the left of the main buttons are a pair of secondary buttons that function as forward and back browser buttons by default.

However, you can change their function using Logitech’s downloadable software, and program them to perform a wide variety of functions. In addition, there’s a smaller button by your thumb for decreasing the mouse’s DPI sensitivity.

You won’t need this for ordinary office tasks, but it can be a lifesaver for graphic artists or gamers who want to switch between precision tasks and more general use.

So, what have we learned about these trackball mice? They’re all a great choice, but at the end of the day, the best one for you is going to depend on your individual needs. So let’s recap them.

The Kensington SlimBlade is ambidextrous and programmable, and also has a large, easy-to-use trackball. However, it only connects via USB, which can make it a poor choice for travel.

The Kensington Expert is a solid upgrade over the SlimBlade, and it comes with a comfortable, supportive wrist pad. It also connects wirelessly, and the primary buttons can be programmed to either the top or bottom sets of buttons.

The Logitech MX Ergo is a great choice for space savers. The thumb-operated trackball takes some getting used to, but it’s very accurate. And the extra media buttons can be programmed to perform common tasks or open your favorite programs. The Logitech Flow software is also an excellent added value.