Smart TVs have become the new normal. Nowadays it seems that everyone has one in their living room. Whether you want to upgrade to a new Smart TV or you’re merely comparing what’s available, this article will examine the LG C9 vs B9 OLED televisions. 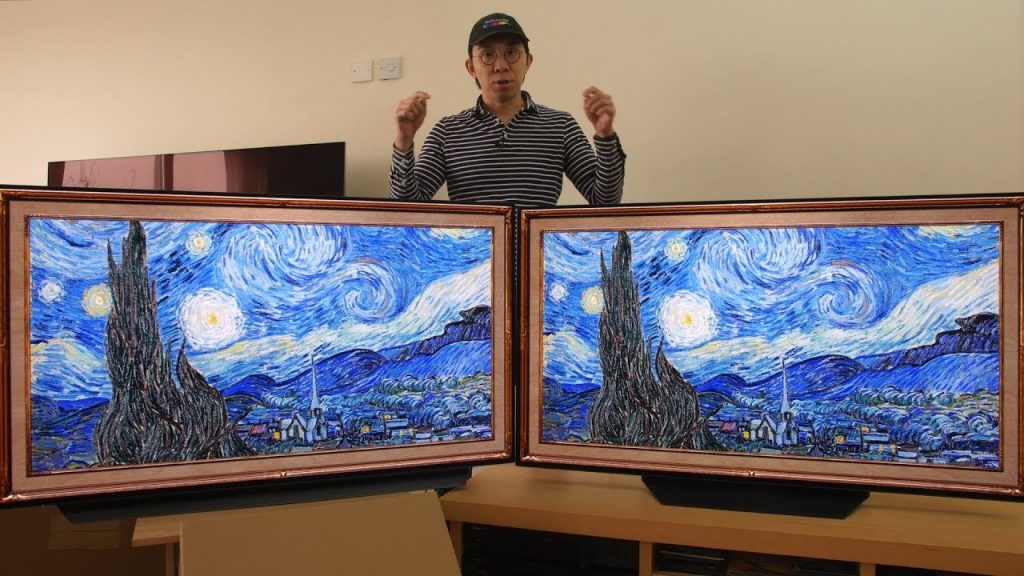 Looking into the popular LG series 9 from 2019, you will be amazed yet confused about which one to choose.

Between LG B9 vs C9, the C9 is costlier and the differences aren’t many. One of the reasons to choose C9 over B9 is its premium build, powerful processor and higher brightness is SDR and HDR content.

There are more similarities between LG B9 vs C9 than differences. The C9 TV has excellent image quality with minimized noise and excellent color presentation.

Both B9 and C9 may suffer from burn-in if you watch TV shows or sports for a long time. Another reason to choose C9 is its excellent gradient handling and gray uniformity.

LG B9 VS C9 Design: So Sleek and So Thin

A few years ago, curved TVs were all the rage. The curved screen gave owners the ability to feel more immersed in the drama on the screen; however, manufacturers seem to be abandoning the promotion of their curved displays.

Curved screens are still available, but not as widely promoted as they used to be previously.

The curve aspect of the screen did seem like a gimmick, so it makes sense that manufacturers are focusing on bigger, better, flatter screens.

Neither the LG C9 nor LG B9 OLED televisions have a curved screen. Both TVs are slim and flat, the thin borders giving them a sleek, modern look.

With a nearly identical thickness, or should we say THIN-ness, of the bezels, this provides each model with a 95.44 screen to body percentage.

The C9 has a sturdier stand with a slightly better build quality compared to the B9. The C9’s base takes up nearly three-quarters of the display’s width.

Compared to the C9, the stand of the B9 is much smaller, accounting for only one-third of the TV’s width.

Neither stand detracts from the screen’s sleekness, allowing either model’s display to remain the main focus.

OLED panels are the most advanced and top-of-the-line display technology available to consumers today.

OLED panels are advanced because individual pixels turn on/off, depending on what is displayed. 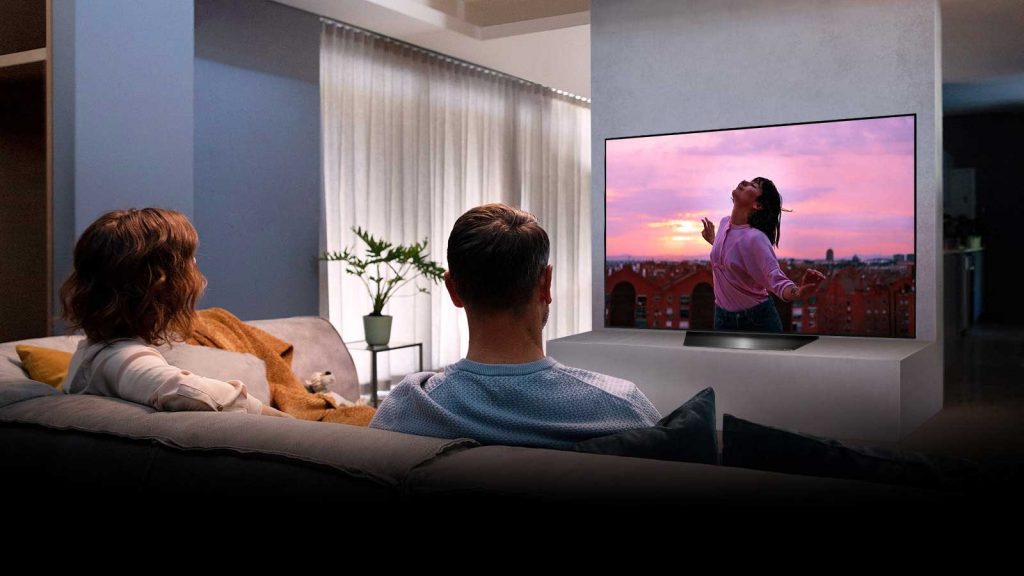 If you’re a fan of darker cinematography, which seems to be the current style, having an OLED television will allow you to view the scenes as the director intended.

If you were one of the millions who enjoyed the ever-popular fantasy show on HBO called “Game of Thrones,” purchase a B9 or C9 OLED television and go back and re-watch the show’s final season, specifically season 8, episode 3. You’re welcome!

While having individual pixels that allow for richer blacks is fantastic, due to the screen not having a backlight like a traditional LED, the screen is not as bright.

Watching TV in the dark, you wouldn’t even notice that the screen is slightly dimmer, but if it’s light out or you don’t have your blinds or curtains pulled, the screen can reflect a glare.

Both the B9 and C9 have a glossy display, which also adds to the reflectiveness of the screen.

The C9 does a slightly better job at hiding reflections than the B9. Personally, the glare isn’t too much of an issue, more of something to be mindful of when planning out your TV-viewing space.

Inputs: When You Got It, Flaunt It

Both the C9 and B9 OLED TVs have the same back-of-the-screen inputs. This section is an overview of both, rather than comparing each television. 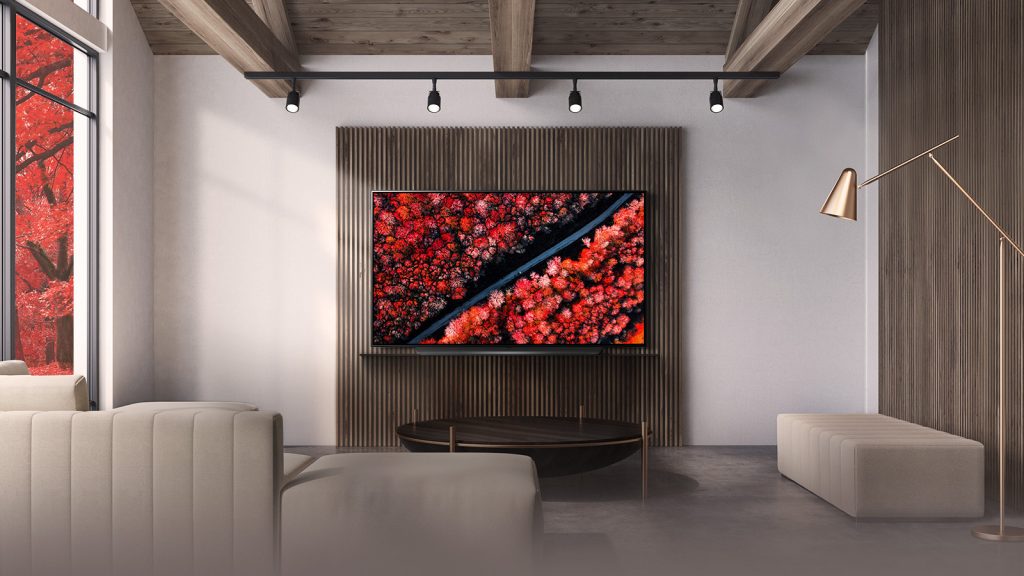 As is standard with most televisions, the C9 and B9 each have one of each of the following: optical out, analog out, composite in, tuner, and ethernet.

These allow you to connect a soundbar or surround-sound system, video or multi-media devices, and a Local Area Network (LAN) wireless Internet connection.

Having three USB ports can be handy if you use an Amazon Fire Stick, Google Chromecast, or other streaming entertainment devices, especially using one of the USB ports as a power source for your streaming dongle.

With HDR enabled, colors will appear more vivid, because the TV can display more life-like colors and expand the range of contrast on-screen.

To watch content in HDR, you will need to have a 4K HDR Blu-ray, a compatible Blu-ray player, or view an HDR movie on Netflix, Prime Video, or other streaming services that provide HDR content.

LG B9 VS C9 Image Processing: Let’s Get Technical

LG’s B9 OLED uses the M16p3 SOC chipset, and the C9 model uses a 018 chipset. A chipset is the television’s imaging processing unit.

HDR peak brightness is lower on the B9, around 450 Nitz, as compared to the C9 at 700 nits; however, the brightness difference is not noticeable in most scenarios.

Brightly-lit content is very similar in both the C9 and B9; although, it’s slightly better on the C9 display.

Both the B9 and C9 OLED displays are fantastic televisions; either would make a great addition to your living room or man cave.

The price difference between the B9 and C9 is only a couple hundred dollars. Either option can run upwards of a few thousand dollars after taxes.

If you have a few hundred dollars extra to spare, treat yourself to the upgrade from the B9 to the C9.

The C9’s display has clearer black and shadow detail, higher peak brightness for HDR content, and the newer chipset.

Whichever OLED you decide to purchase, you can’t go wrong. LG has created fantastic products that will last for years to come.

We believe that you must have found this post super useful. Feel free to invite your friends and family to see more interesting articles here.