Marantz pm6006 review 2021: Marantz took the opportunity to fine-tune an already fine amplifier and has come up with trumps yet again, let’s take a closer look at what this device can offer.

The PM6006 appears to be a modest heir to the five-star PM6005, getting a second optical input, new ‘high-performance’ feet to further reduce unwanted vibrations, and upgraded internals.

Also including an improved power supply and extra metal housing to further limit the impact of the digital stage on the analogue signal.

The front face is dominated by a pair of dials one for toggling input and one for managing volume flanking a slim-line LED source indicator.

Below the latter is a quartet of buttons for switching between the amp’s internal DAC and analogue inputs, between either or both pairs of wired speakers, and to operate the PM6006’s ‘loudness’ feature.

Further down is another trio of smaller dials for fine-tuning bass, treble, and balance, and also a 6.3mm headphone jack.

On the back panel, you’ll find five analogue line-ins, a coaxial and two optical digital inputs, outputs accommodating two pairs of speakers, and a tape loop for recording.

That means there’s still no USB input – Marantz says to include one would be impossible at the price point and to look further up the chain if that is indeed a deal-breaker.

It’s a characteristically full-bodied and focused Marantz presentation, with plenty of detail to boot.

Maybe the most granular textures aren’t so readily on offer – this amp favors a smoother and more wholesome overall tone. And musicality is one of the PM6006’s strengths. 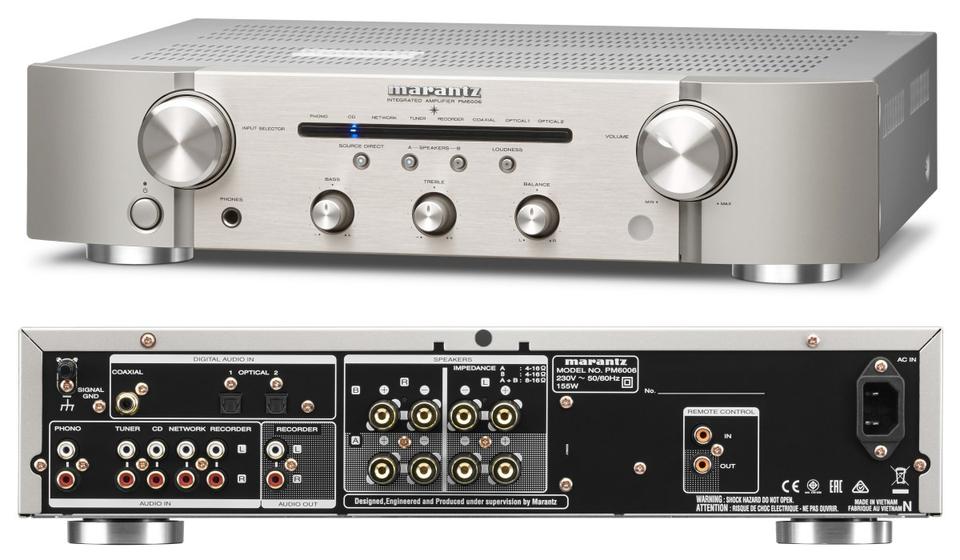 The balance is tonally even and overall it’s pleasingly insightful, with a nice wide soundstage – but even more so it’s rhythmically and dynamically confident.

There’s a certain smoothness between strands, yet also enough punch and drive to grab attention, with the Marantz’s keen sense of timing accented by a dynamic range sympathetic to leading notes and auxiliary rhythms.

These aspects can, of course, be improved upon if you’re willing to pay, as with any other facet of performance – but the PM6006’s talents are such that it will musically trump many amps much further up the food chain.

The built-in DAC is a decent performer that retains much of the detail we hear through the line stage but loses a bit of body and natural warmth on the way.

The transition from Marantz’s PM6004 amplifier to the PM6005 saw the addition of a DAC and digital connections – an upgrade that hurtled it into the digital age, thus giving it a good shout of topping the modern-day consumer’s shopping list. No such radical step has been taken with the PM6006.

The second optical input certainly makes it more versatile for someone with a combined two-channel hi-fi and home cinema system looking to connect a hi-fi component.

But it isn’t the extra digital input we’d really like it to have. With the PM6005, we expressed our wish for a USB input for a more straightforward connection to a laptop, and that wish remains unfulfilled.

With the right adapter, you can hook up a laptop via either of the amp’s optical inputs, but it’s not ideal.

WHAT’S THE GOOD SIDE?

WHAT’S THE BAD SIDE?

More evolution than revolution, the Marantz PM6006 exists as another solid go-to for someone nailing down their first hi-fi system.

It has a clearly improved sound over the impressive PM6005 and a marginally more appealing set of digital connections.