To keep up with the times, Marantz’s new PM7000N integrated amplifier ($999) is the first stereo hi-fi component from the company to support HEOS multi-room audio streaming integration, allowing owners to enjoy music from a variety of services without the need for a dedicated source component. 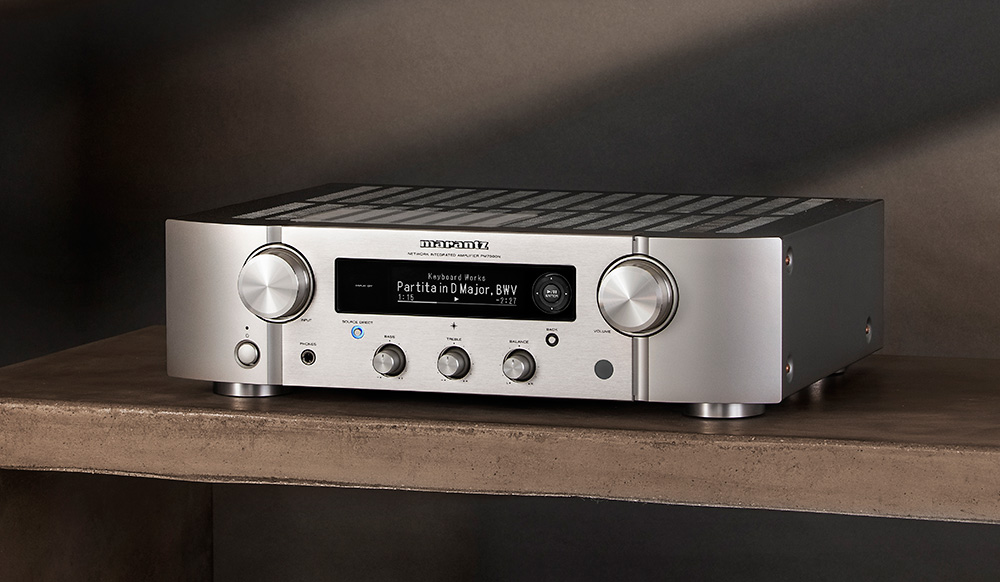 The Marantz PM7000N integrated stereo amplifier comes in a large box and is firmly held in place by pieces of polystyrene.

A pre-programmed infrared remote control is also included so that you can control a Marantz CD/SA-CD player as well as the amp.

Two antennas to screw onto the back of the device for the Bluetooth and WiFi connections are also included.

The Moderate Look of Marantz PM7000N

Naturally, your preferred navigation tool will be your smartphone or tablet running the HEOS streaming app, from which you can access and control music, switch sources and connect players in a multi-room capacity.

We’ve seen better streaming apps – BluOS and Naim, for example – but HEOS is robust and easy to use.

If you misplace your phone or prefer a more hands-on approach, the plasticky front-panel navigation buttons can be used to perform simple control tasks.

There’s an argument for not having text displays on streamers – after all, your smartphone screen is essentially a display – but we like that we can put our phone down and read song information during the playback of an album, courtesy of Marantz’s three-line OLED display.

Aesthetically, this is an old-school Marantz, with large volume and input dials, smaller bass, treble and balance tone knobs, and a 6.3mm headphone jack.

Less obvious is the function that allows the Marantz’s supplied remote to control the volume, input, and power of a connected TV.

The downside to Marantz’s design consistency is that the PM7000N doesn’t look particularly premium compared to some of the company’s more affordable products, but it’s smart and well built for the money.

For anyone with another Marantz kit or who simply has a more traditional taste in hi-fi, it will fit right in.

There are two ways to connect the Marantz PM7000N to the local network.

You can either connect its Ethernet port to one of the network ports on your home’s internet box using a networking cable, or you can connect it to the local WiFi network once both of the WiFi antennas are screwed onto the back of the amp.

It is important to note that the PM7000N is compatible with dual-band WiFi, which ensures a stable connection, even in busy environments.

The Marantz PM7000N’s network connectivity allows it to access music shared over the local network, but also several online music services and thousands of web radios.

Big, bold, and energetic – right from off, the Marantz’s sound exceeded initial expectations. A rhythmically propulsive quality stood out.

Even seemingly simple music benefitted. Like Zsofia Boros’ subtle guitar work on ECM, which through the PM7000N trades between-the-notes delicacy for a touch of urgency.

That impetus makes up for a slightly dull treble. Bass isn’t overly honed either, more Tyson Fury than Deontay Wilder.

Grace Jones’ Hurricane is a veritable low-end onslaught. Overall the sound communicated by the PM7000N was more infectious than refined.

These initial findings were derived from playing Roon over AirPlay 2. Switching over to HEOS brought forth a big ‘wow’.

HEOS streamed, the ‘Refrains’ from John Potter’s Care-Charming Sleep sounded quite beautiful. The guitar was crystal clear, notes hung in the air.

Treble is more direct than silky, hinting at where things might improve – the sound can harden at higher levels, particularly on poorer recordings. 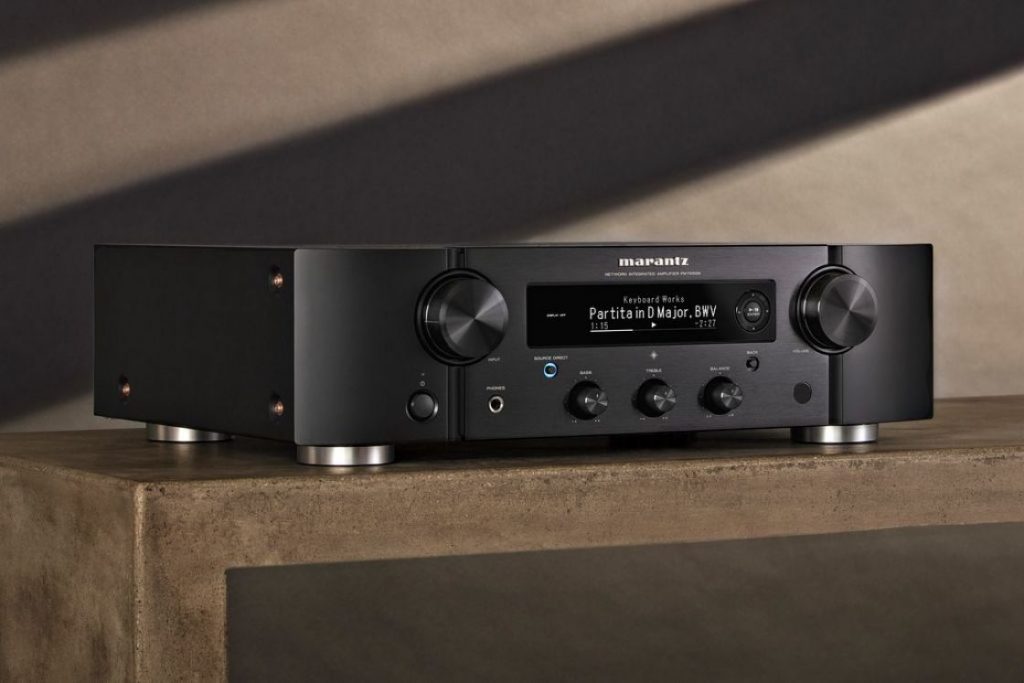 Denon offers the PMA-150H as a direct competitor to the PM7000N. Priced at $1,099, you’ll find a number of shared features between these two integrated amplifiers.

The most striking difference between the two is in chassis design.

The Denon is far more compact and lighter, making it a great option for those in need of an amp that needs to fit in a tight space.

It also features a far more modern design aesthetic when compared to the Marantz.

Each uses a different DAC chip, allowing the Denon to stretch PCM and DSD compatibilities a bit higher in resolution.

The Denon also features a USB-DAC input option, which the Marantz lacks, making the Denon a potentially better option for those who use a computer as a source device.

However, the Marantz includes a phono preamp section that the Denon lacks, making the PMA-150H a nonstarter for those who own a turntable.

The Marantz PM7000N was a wonderful surprise and enchanted us with its spatial and dynamic abilities. Its output power of 2 x 60 watts was perfectly harnessed to bring substance to the music. The soundstage was extensively spacious, lively, and realistic. 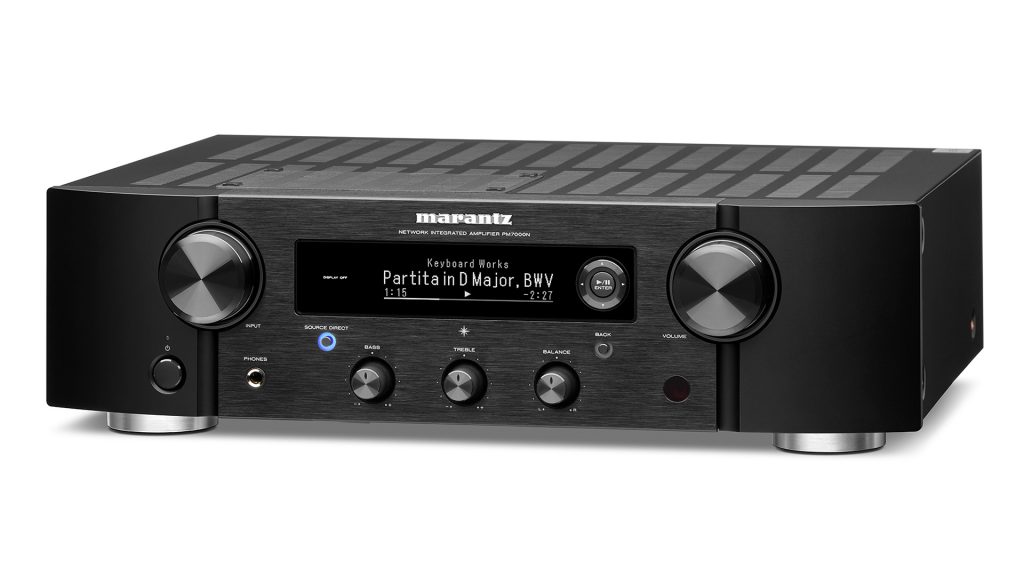 Navigation directly via the amplifier’s interface is functional, but the visual comfort of the monochrome three-line display is rather poor.

We preferred the user-friendly and responsive Heos app. It’s a shame that Qobuz still isn’t included.

Unfortunately, the Marantz PM7000N isn’t compatible with the aptX and aptX HD Bluetooth codecs when it comes to connectivity.

That said, the amplifier manages fine without them, and in any case, Hi-Res enthusiasts will likely turn to network streaming for FLAC and DSD files if they want to enjoy true hi-fi sound.

The absence of HDMI connectivity and a Type-B USB port is made up for by the presence of a double optical S/PDIF input and the ability to play audio files stored on a computer and shared the local network.

This product is currently out of stock but the moment it is available you will be updated.

Thank you for reading through this article, if you like what you have seen please hit the share button or recommend it to a friend. You can also visit our site here for more interesting information.