Onkyo TX-NR686 7.2 Channel Network AV Receiver: Hi-definition surround sound isn’t only a matter of having nice speakers. In the process of creating high-quality audio, distortion can weasel its way into a signal at countless junctures. 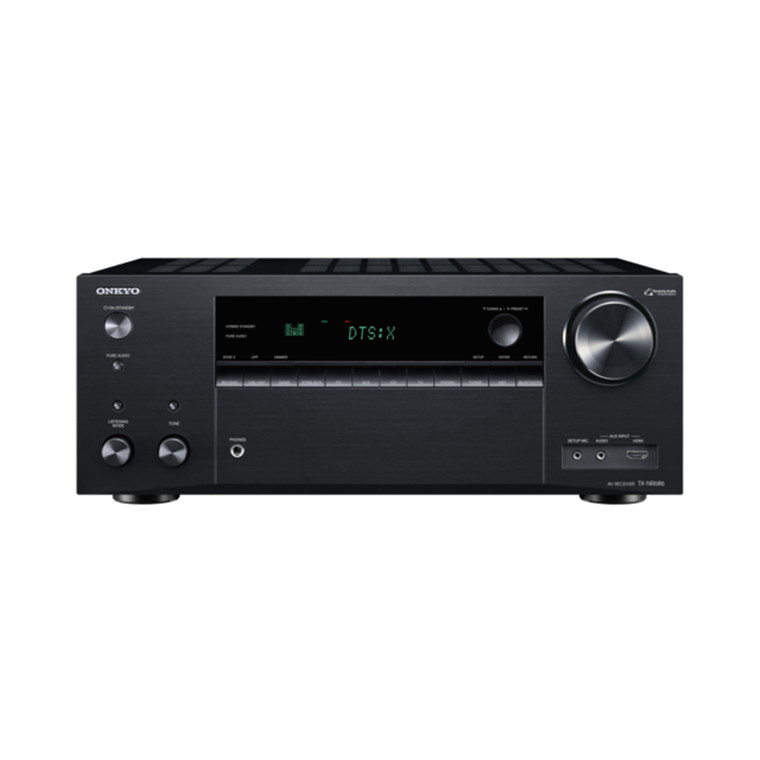 But in many cases, quality isn’t the issue at all. Instead, the issue is capability. When it comes to high-quality surround sound, whether or not a receiver is capable of doing what you want isn’t something you can take for granted. And it requires a close look at a receiver and its features to truly understand what you’re getting yourself into.

Onkyo isn’t a household name like Sony, but within the audio industry, they have essentially the same degree of respect. It also has established a reputation for making some of the best sounding home cinema receivers on the market, and for making reliable products that seem to get better with each generation.

Granted, major advancements in audio technology tend to occur slowly. As a result, most stereo receivers don’t receive many huge improvements from one generation to the next. But the Onkyo TX-NR686 is different.

Along the back of the device, you’ll find six HDCP 2.2 HDMI inputs, which are suitable for 4K content and other high definition formats. Those ports are also suitable for HLD, Dolby Vision, and HDR10.

In the interests of convenient and quick installation of your sound equipment, the various ports are visually broken into two separate zones of operation. Each distinct zones allow you to rig-up and run separate speakers for multiple rooms.

You can then do playback of both zones simultaneously, or even use independent audio sources from each zone of operation.

Listening to the TX-NR686, you can immediately tell that audio quality is beyond the range of what you’d expect, likely thanks to an auto-calibration feature. That feature helps you measure the resonance of your room, allowing you a greater degree of fine-tuning the sound to accommodate your unique surroundings.

Not all sound settings will sound equally great in any space, so being able to make those kinds of adjustments adds a great deal.

DTS:X and Dolby Atmos are object-based surround sound formats. For people creating audio content, they provide better control over the placement of various effects within the soundscape. They’re also what’s responsible for the height speakers, sending sound downwards from above.

Most AV receivers are intended to sit at the bottom of an entertainment console, neatly resting out of sight and out of mind. Onkyo’s receivers embrace that fate and don’t make much of an attempt to jazz-up the aesthetic of their design.

Even the LEDs used to provide track information are composed of a muted green that could at best be described as unassuming and simple. It looks incredibly generic and non-descript, resembling one of the hundreds of similar receivers.

The receiver itself stands just over 17-inches wide, 7-inches tall, and slightly over 12-inches deep. That’s the bulky build you ordinarily see on midrange stereo receivers. On the face of the device, the LCD menu is the same menu system used on Onkyo’s much earlier units.

The remote is genuinely terrible. It’s covered with nearly 60 buttons, so using it is more confusing than operating an aircraft. The buttons you’ll use the most, like the volume and menu buttons, are far too small to be convenient. Important buttons are often no larger than less important buttons.

Although you can press a button and it will do what you expect, it can take weeks of use to feel truly comfortable using the remote. 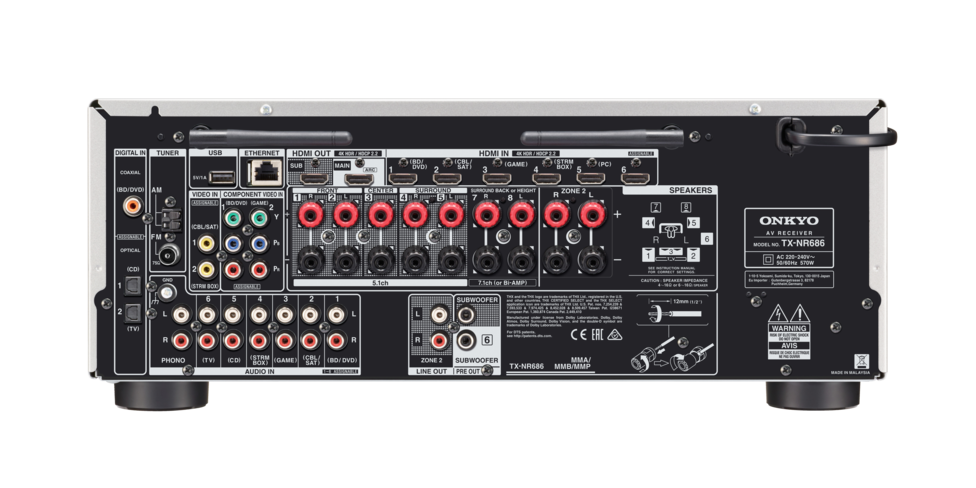 The Onkyo TX-NR686 delivers on the latest and greatest technologies in sound formatting, especially DTS-X and Dolby Atmos. With the addition of wireless services like Wi-Fi, Bluetooth, and AirPlay, you’ll have no problem making quick and easy wireless connections from essentially any device.

The hardwired connections are just as easy and include eight HDMI inputs, a phono input, and two outputs.