PCIe Gigabit Ethernet Network Interface Cards: We’ll look at a router and determine that it’s the fastest on the market, then three months later something better has come along. When you’re sending data through the air, you’re constantly battling a number of different issues.

Signal quality, clarity, obstructions, and interference are all major factors. Your results in one situation won’t always be comparable in another.

It goes without saying that Intel is the top brand when it comes to enterprise hardware. A network card is a very low-level device. It interacts with the chipset and bus on a very simple level, so simplicity is key.

Because Intel designs the chipsets for almost every major motherboard, nobody is better equipped than them to create a bulletproof piece of hardware.

At the heart of the Intel Gigabit CT PCI-E Network Adapter is the Intel 82574L Gigabit Ethernet Controller. This same controller is found in a lot of products. The top of the line server and gaming computers often have this chipset built right into their motherboard.

What makes it so special? For starters, it uses very little power, making it highly efficient. Next, it has two queues for each Tx (transmit) and Rx (receive.) This allows the card to prioritize which data gets sent first.

Large, intermittent packets will always be sent below compact, time-sensitive ones. The end result is better performance, lower PING rates, and better handling of large loads.

Performance isn’t as easy to measure as it is with some products. For a single file transfer, this card approaches the theoretical limit of gigabit Ethernet just like any other. The performance improvements are a little hidden, but definitely present.

Even though the CPU is no longer handling the networking, the card still needs to communicate with your processor. It does these through interrupts. Interrupts tell one core of your processor, “Hey! Stop what you’re doing. We’ve got work to do.” This NIC can group requests together, sending an interrupt only when necessary. This means that your CPU is free to do any other task you’ve assigned to it. 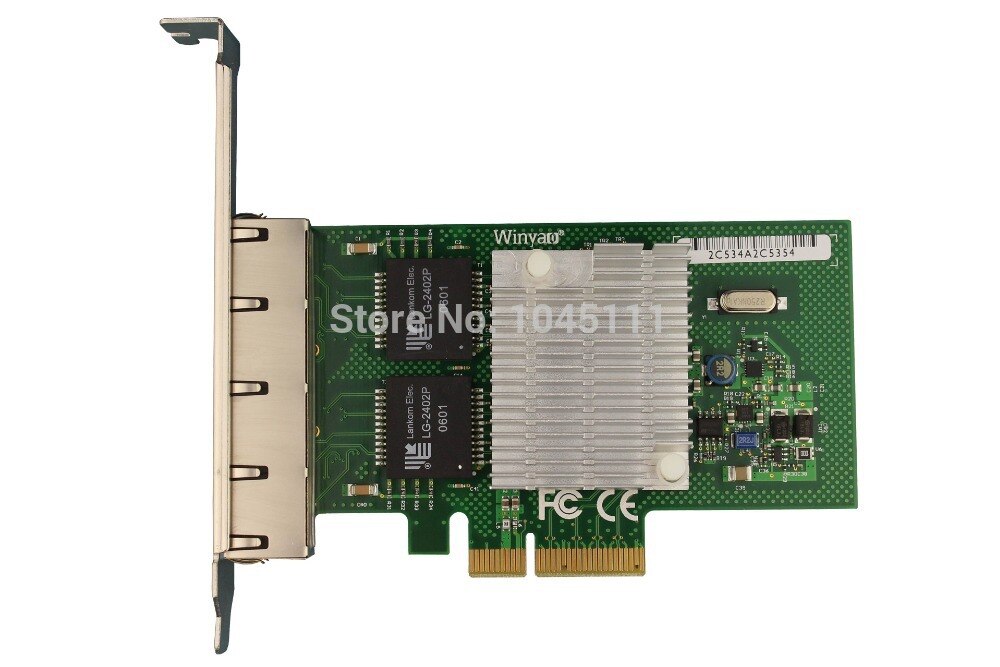 Rosewill is another manufacturer that targets the business sector, although they take a radically different approach to their devices. Rosewill solutions are along the lines of “everything but the kitchen sink.” If you’re looking for the best in features, you’ll be hard-pressed to find something better than this option.

With the Rosewill Gigabit PCIe Network Adapter, instead of going for the brand name, they went for a programmable RC-411 standardized chipset. This chipset has been used in hundreds of different scenarios. The reason is that it’s very powerful.

Perhaps a little overkill for most networking applications, but Rosewill made sure that it had the firmware it needed for almost any situation. One of the most important features of this chipset is that features can be enabled or disabled depending on the environment. This has implications in both performance and compatibility.

One of the most stand-out features of this card is its ability to support full-duplex mode. Essentially, this refers to the rate that data is transferred. Half-duplex used to be more reliable, although this is less of a problem with professional-grade networking equipment.

If you’ve ever shopped for an affordable cable or computer accessory, StarTech is likely one of the first brands that came to mind. Their focus is on affordable hardware that still uses high-quality components. For this reason, they’ve become the first choice for businesses.

Based on price alone, this Ethernet card might seem like a bargain-basement model that is to be avoided. But once we saw the specs, we knew that it was going to be one serious piece of kit.

The StarTech Gigabit Ethernet Network Card is available with either 1, 2, or 4 ports. They can also be purchased with 25W power over Ethernet (POE) hardware, something that is commonly used in industrial environments.

Most users will just need the standard model. Regardless of which one you choose; the power of this card comes from the Intel I210 controller.

For standard users, the area where this card will excel is stability. It’s designed for incredibly high bandwidth uses, often with custom firmware running.

This means that if you’re just using the standard network technology, you’ll notice excellent ping times, even when there is a lot going on in the background.

It also supports jumbo frames up to 8K in size, making it perfect for high volume data transfer. In the right environment, this is one of the most reliable cards you can get your hands on.

The first thing you’re going to want to do is to determine what exactly you’re looking to do. If you’re purchasing this card for gaming, grab yourself an Intel Gigabit CT PCIe Network Adapter. This card is the most reliable on the market, and you’re not going to be able to take advantage of the extra features in the other models on a home network.

If you’re replacing the card is a workstation or non-essential PC, you’ve got two options. The Intel card can give you reliability, but we’d prefer the StarTech Gigabit Ethernet Network Card. There are a few extra features that are helpful to have in a business environment and will help you improve the speed.

Lastly, the Rosewill Gigabit PCIe Network Adapter is best in servers or testing environments. It can be put to use in any computer system that is connected to from multiple sub-networks or VLANs and is designed to be able to open a secure connection with any of your internal systems, no matter how old they may be.

In fact, this card is commonly used by system administrators to move legacy software into a virtualized environment.